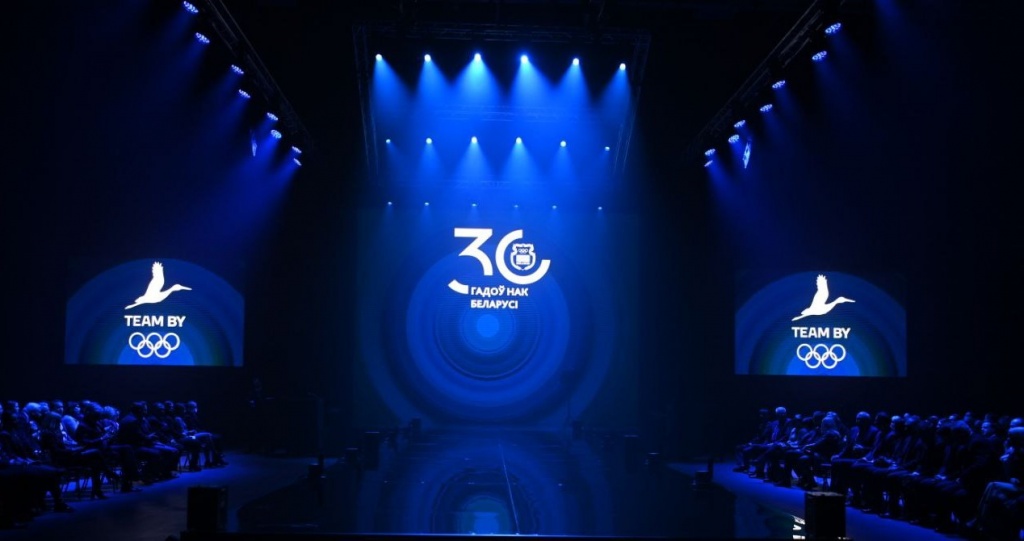 On 22 March 2021 the National Olympic Committee of the Republic of Belarus marked its 30th anniversary.

On that day Team Belarus uniforms for the Tokyo Games were presented at the Falcon Club Arena sports and entertainment complex, one of the best sports complexes of Minsk. 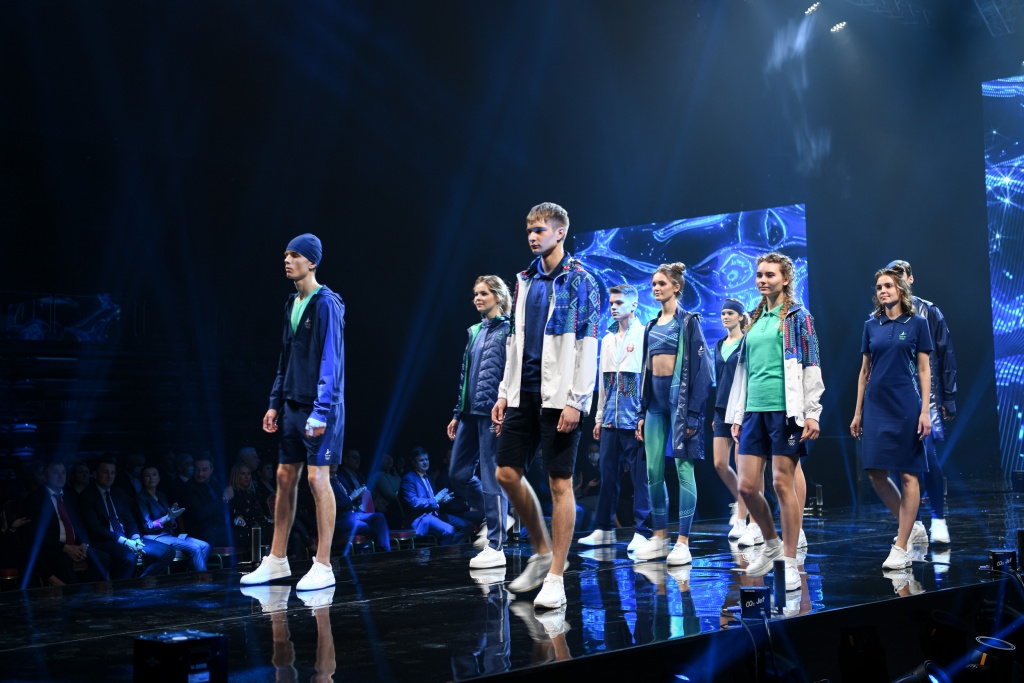 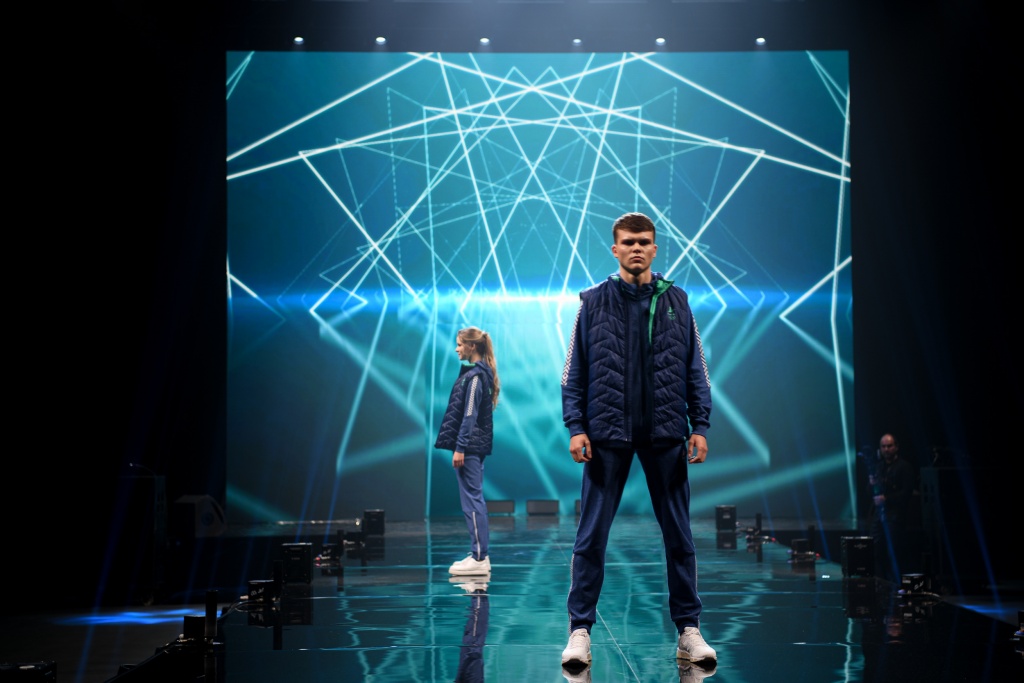 Prior to the presentation, NOC President Viktor Lukashenko congratulated all the attendees on the 30th anniversary of the organization, noting that in a relatively short period of independence Belarus achieved significant results in the international sports arena.

«High-quality infrastructure, professional coaches and talented athletes allow us to reach Olympic heights. The doors of the NOC are open to everyone: we welcome new initiatives, interesting projects, fruitful and constructive work to strengthen the Olympic movement. We remain committed to hosting major sports events under the auspices of international federations, which draw a lot of attention in our country», Viktor Lukashenko said. 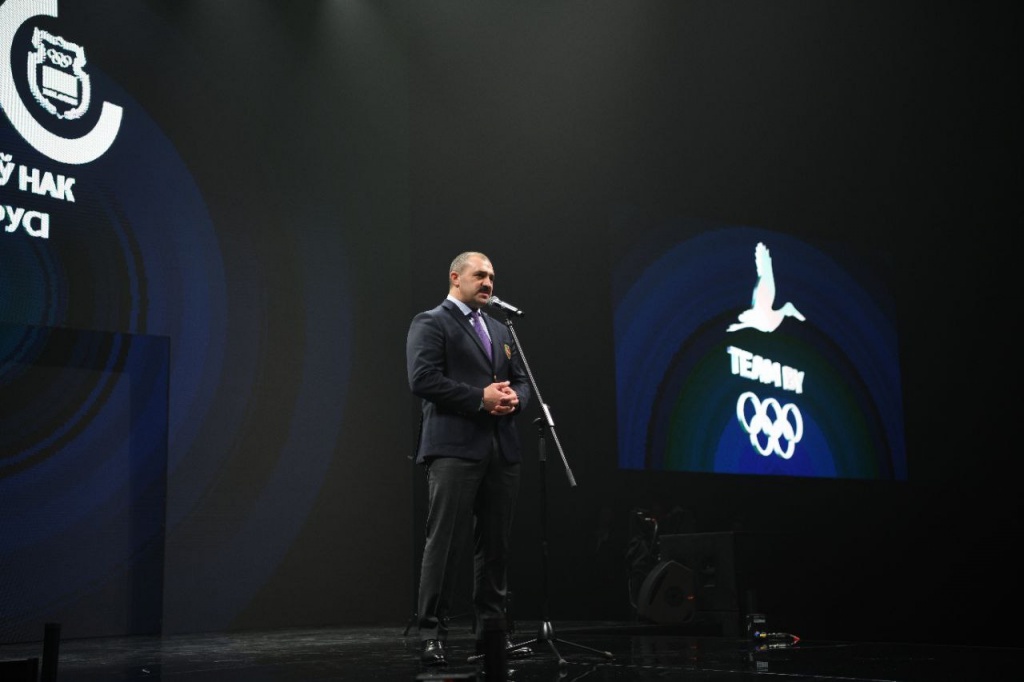 On behalf of the Belarusian Olympic family he thanked sports veterans for their great services to sport.

You have left a great legacy that allows a new generation of Belarusian athletes to achieve new heights. Undoubtedly, much has already been done. But there is still more to be done. I am sure that the successful performance of our athletes at the Summer Olympics in Tokyo and the Winter Olympics in Beijing will be the best gift to celebrate the 30th anniversary of the NOC of Belarus», he added.

«I thank all Belarusian Olympians for their skill, persistence, and will to win, for joy and pride you bring to millions of Belarusians», he said. 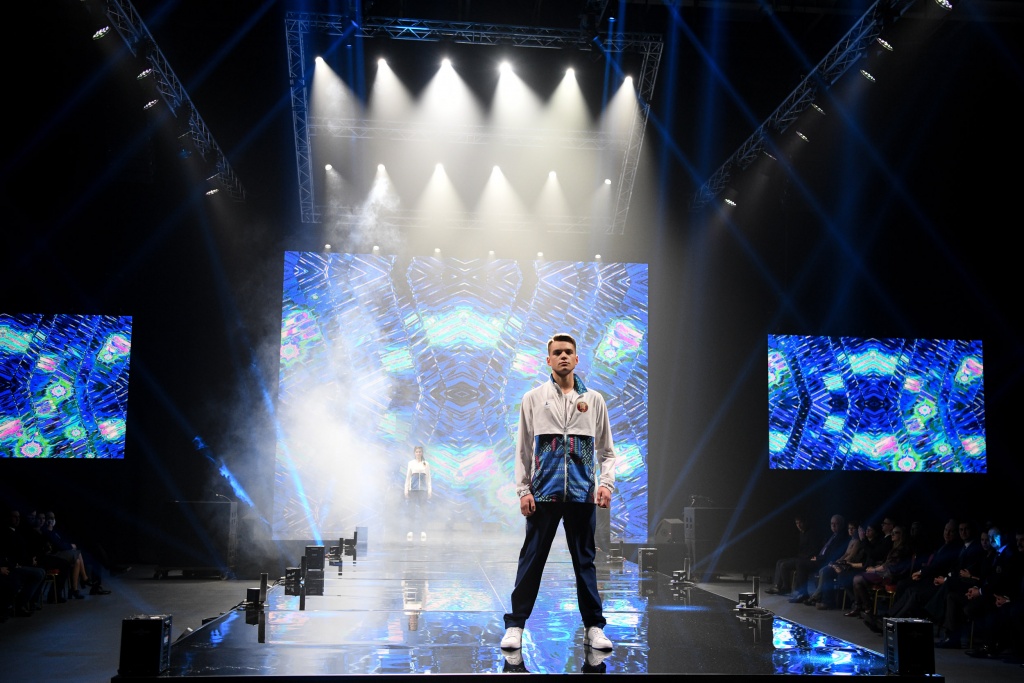 The anniversary celebrations were attended by Belarus’ best athletes and coaches, as well as sponsors.

The outfits were presented by models of the National Beauty School.

The design was developed by the NOC and the Solo-Pinsk private company. 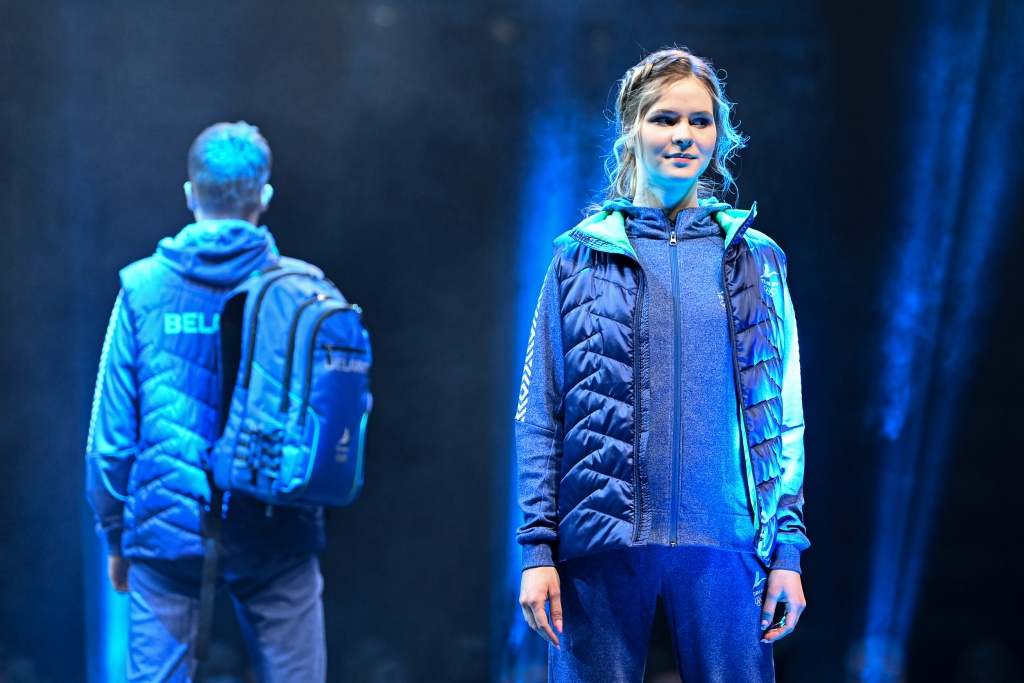 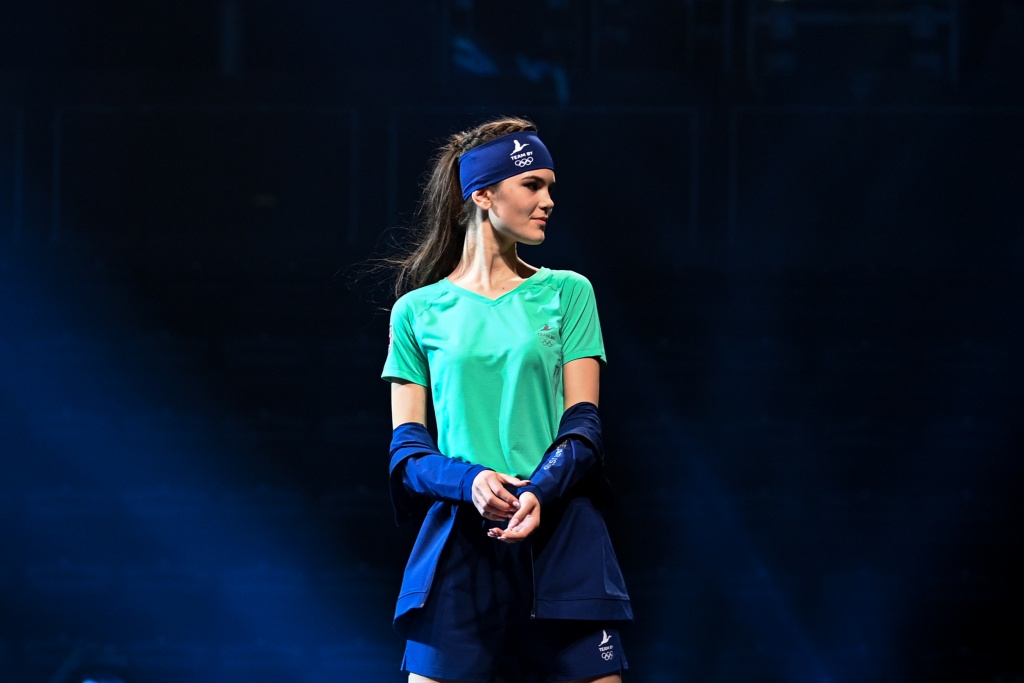 At the end of the presentation Solo-Pinsk Director Vasily Goreglyad noted that that his company was privileged to fulfill such an important order. «The work on developing the collection for Belarusian Olympians has been going on for over a year. We used high-quality materials, paid much attention to both convenience and color. The print on the uniform reflects entire Belarus: nature, character of people, originality. For us, the production of the uniform kit for the Belarusian Olympic team is the biggest honor. This means that we are on par with world-class brands,” Vasily Goreglyad said.

Eminent Belarusian athletes were also impressed by the presentation. Olympic champion Antonina Koshel emphasized that she was glad to see everyone again at the NOC anniversary celebrations. «I am overwhelmed with emotions: today I saw many of our famous athletes, including retired ones. Many liked the uniform kit. The outfit means a lot: when you are wearing a beautiful outfit, it boosts your spirits. I think the new uniform will bring luck to our Olympians,” Antonina Koshel said. 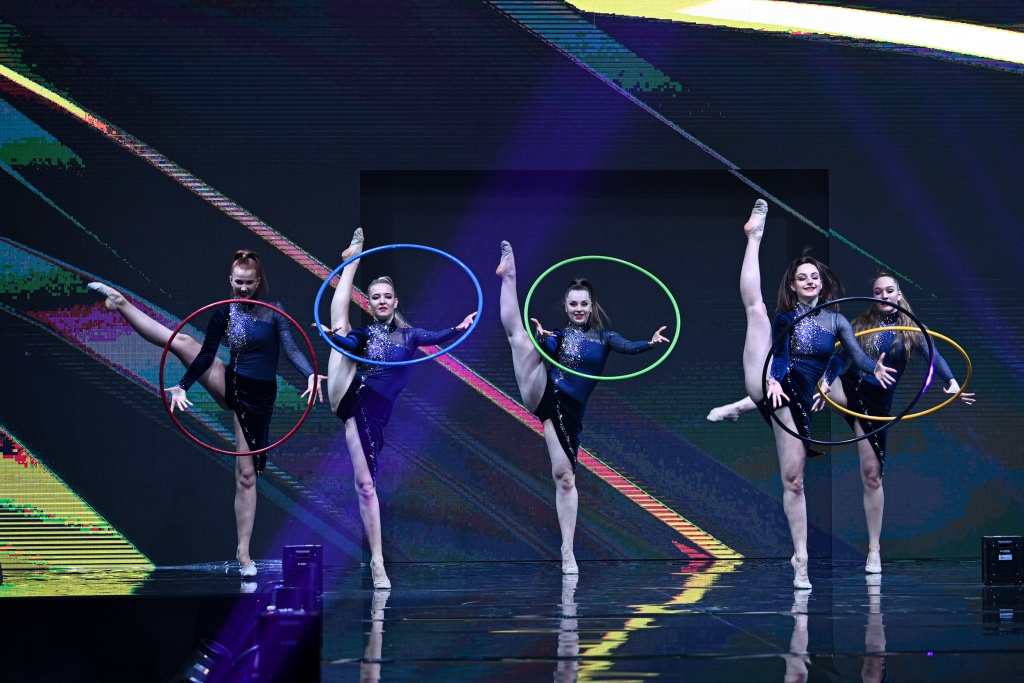 The participant of the Rio Games Katsiaryna Halkina also shared her impressions. «The collection is worth the praise, I would like Belarusian athletes to don Belarus-designed uniform while performing internationally. The outfits are nice. Everything is in bright colors, the design is good,” Katsiaryna Halkina said. 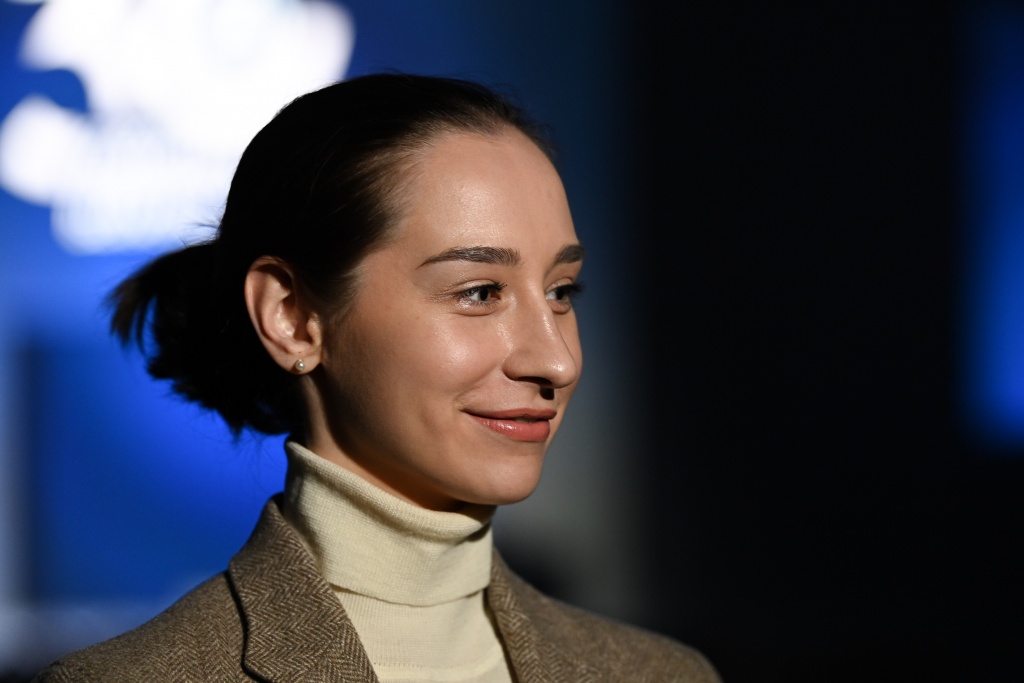 Chairwoman of the Belarusian Swimming Federation Ella Selitskaya stressed that the collection is great. «The uniform should inspire our athletes to perform well on the international arena. The logo TEAM BY with a stork was a great idea too. It has a unifying effect and draws focus to an important thing: to represent your country to the best of your abilities. Now our athletes really need all-round support. They are doing a great job and continue to prepare for the Games,” Ella Selitskaya said.

The presentation was wonderful. I want to congratulate the designers of the collection on the job well done. I hope this uniform will help Belarusian athletes to achieve high results. I would also like to extend my greetings to the NOC of Belarus on its 30th anniversary! An important milestone when you look back and take stock of the things accomplished. Much more is still ahead. In my youth we did not have such uniforms. Now the sports infrastructure is excellent, although competition has become much tougher,” Andrey Barbashinsky said. 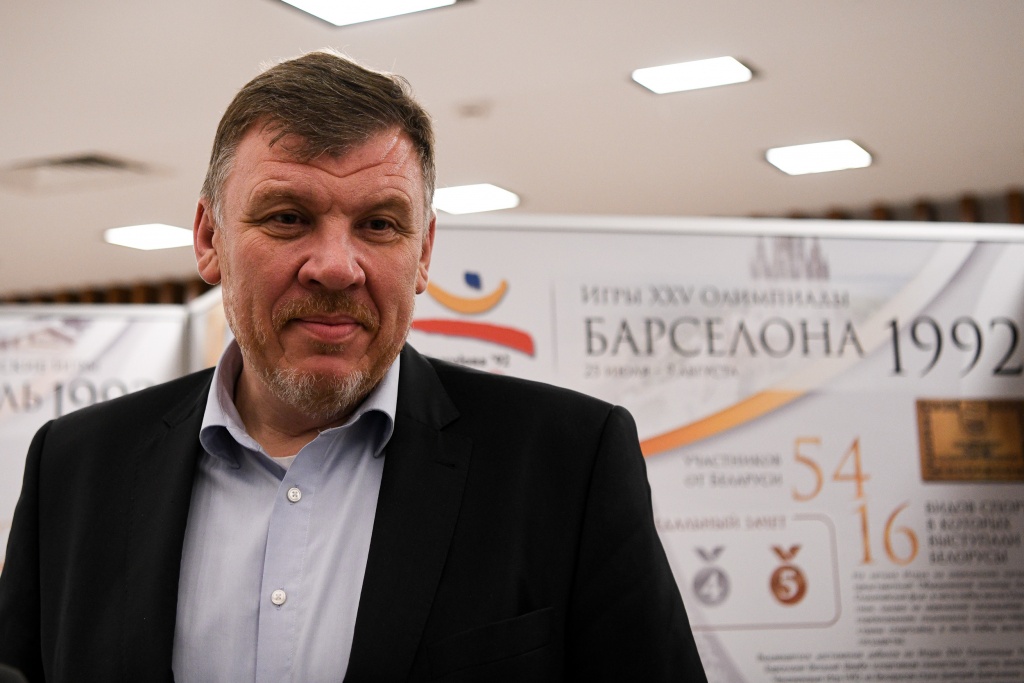 One of the veterans of Belarusian sport, Leonid Khromenkov, who was at the origins of Belarus’ NOC, wished the young generation to draw on the experience of the past years and look at the future with optimism. “The NOC of Belarus was taking shape in the very difficult conditions of the early 1990s. Back then we had two rooms, a staff of several people. Since then our Olympic movement has grown significantly. I want to wish big victories, more medals at major competitions and continuous attention to veterans,” Leonid Khromenkov said.

For the first time in its history, Team Belarus will perform under the Team BY brand that was unveiled at the end of 2018.

The logo features a stork - the symbol of Belarus. Its design symbolizes the team’s determination to win and reach new heights.

A Team Belarus promo video premiered during the presentation.

The National Olympic Committee was founded on 22 March 1991.

On 9 March 1992, the NOC of Belarus was granted temporary membership at the International Olympic Committee.

At the 101st session of the IOC, which took place in Monaco on 21-25 September 1993, the NOC of Belarus was recognized a full member of the international Olympic family. The Republic of Belarus got the right to send its national team to the Olympic Games!

Since the founding of the National Olympic Committee, the country's athletes have competed at 13 Olympic Games - 7 Winter Games and 6 Summer Games. A total of 128 Belarusian athletes became champions and medalists of the Games. They won 96 Olympic medals: 20 gold, 32 silver and 44 bronze.

Professional and amateur athletes have access to world-class sports infrastructure: the national Olympic stadium Dinamo, the multifunctional sports and entertainment complex Minsk Arena, the multifunctional cultural, sports, and entertainment complex Chizhovka Arena, the Olympic complexes Raubichi and Staiki, the Uruchye sports center, the national Olympic training center for rowing in Zaslavl, the regatta course in Brest, the national Olympic training center for equestrian sports and horse breeding in Ratomka, the Timoshenko Shooting Center, and many more.

A technical center for national football teams and a freestyle training center with a sports and recuperation facility have been commissioned in Minsk in recent years.

Every regional center is home to sports centers and indoor ice rinks. There are new sports and recuperation facilities in Berezino, Brest, Borisov, Volozhin, Kostyukovichi, Stolbtsy, Stolin, Cherven, Ushachi, Raubichi, and Krasnopolye. A new sports complex for team sports featuring a ski track opened in Orsha, new stadiums were built in Baranovichi, Lida, Borisov, Ivatsevichi, and an ice arena was commissioned in Shklov.