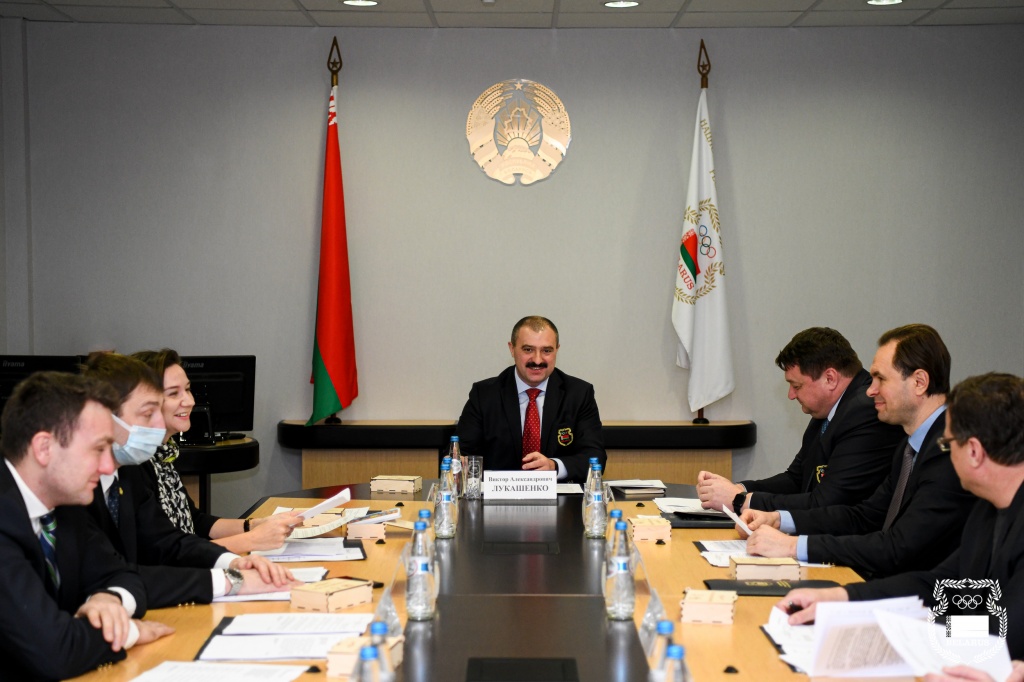 On December 22 the Executive Board of the NOC Belarus meeting took place at the headquarters of the National Olympic Committee of the Republic of Belarus.

The main issue of the meeting was the consideration of the organization's activities in 2020 and the approval of the plan for 2021, the next year which will pass by under the sign of the Olympics in Tokyo and the 30th anniversary of the foundation of the National Olympic Committee of the Republic of Belarus.

To sum up the results of the year, the NOC Executive Board of the Republic of Belarus expressed satisfaction with the performance of the Belarusian team at the III Winter Youth Olympic Games in Lausanne, where our athletes won gold (Illia Korzun, 3-on-3 hockey) and bronze (Yulia Kavaleuskaya, biathlon) medals. During the period of participation in the Youth Games, the heads and administrative staff of the sports delegation of the NOC Belarus visited the headquarters of the International Olympic Committee (IOC). The IOC President, Thomas Bach, and the leaders of the Olympic Solidarity took part in the negotiations.

The National Olympic Committee of the Republic of Belarus cooperates with national sports federations and provides timely information needed to prepare for the Games of the XXXII Olympiad in Tokyo (July-August 2021) and the Winter Olympic Games in Beijing (February 2022). The monitoring of the acquisition of licenses by Belarusian athletes is carried out on an ongoing basis, followed by confirmation of their use in international sports federations.

Close contact has been established with the organizing committees of the Olympic Games in Tokyo and Beijing, which allows to resolve promptly all issues related to the participation of the Belarusian delegation in the upcoming Games.

In 2020, the NOC of the Republic of Belarus was able to implement a number of projects supported by Olympic Solidarity, among which is a popular educational publication for a general audience «The History of the Olympic Movement for everyone «Faster. Higher. Stronger.», which was published for the new academic year, and the project «Rules of life of Belarusian athletes», which has started in June 2020 and includes a series of videos and a book edition.

The publication «The History of the Olympic Movement for everyone «Faster. Higher. Stronger.» consists of five sections. The sections are dedicated to different issues of the Olympic movement and have a unique artistic design.

The video project "Rules of life of Belarusian athletes" will be broadcast on the country's leading state TV channels, as well as on the YouTube channel and in the official accounts of the NOC of the Republic of Belarus in social networks during 2021. The book will be based on videos and will represent interviews of the project's heroes and their personal photos. The project is expected to be completed by March 2021.

During 2020, the NOC of the Republic of Belarus has been actively involved in the promotion of Olympic values through a number of events with the participation of educational institutions.

For example, in 2020 excursions were conducted for 705 people, taking into account anti-epidemiological measures. The main categories of visitors are students of institutions of general secondary, secondary specialized and higher education; foreign guests and members of official delegations; workers of physical culture and sports.

In anticipation of the new academic year 2020-2021, new editions of the «Olympic Diaries» were developed and transferred to institutions of general secondary education for students of grades 3-4 and 5-11 with a circulation of 15 thousand copies.

On the Day of Knowledge, September 1, an Olympic lesson took place, which for the second year in a row was held in the format of an intellectual tournament. More than 100 participants in 16 teams from the regions and Minsk, which included school students and famous Belarusian athletes, demonstrated their knowledge of the Olympic movement and the role of Belarusians in it. According to the results of seven rounds, the victory was won by the guys from the Strela team of the Minsk State City Olympic Reserve School, together with the skater, the winner of the World Cup stage in mass start, Vitaly Mikhailov.

In total, more than 1000 works took part in the Republican contest, and 72 drawings dedicated to the II European Games in Minsk and the upcoming Games of the XXXII Olympiad in Tokyo were selected for the decisive stage. The authors have tried to reflect in their drawings the sports that are most popular in Belarus: rhythmic gymnastics, athletics, basketball, cycling, karate, wrestling, etc. The winners and prize-winners of the contest were determined by the competent jury, which included representatives of the NOC of the Republic of Belarus, Ministry of Education, the Paralympic Committee of the Republic of Belarus, the Belarusian State Academy of Arts, famous athletes such as Anton Kushnir, Dmitry Dovgalenok, Natalia Tsilinskaya, Yuri Golub, Vasilisa Marzalyuk and Tatyana Ledovskaya.

Additional education has been organized at the Russian International Olympic University (RIOU) to participate in training and retraining programs for highly-qualified specialists in the field of sports management for the world sports industry and the Olympic movement.

Following the results of joint work with RIOU, a list of 40 specialists for training was agreed upon.

In July, on the occasion of the 40th anniversary of the XXII Summer Olympic Games in 1980 in Moscow, the NOC of Republic of Belarus held a celebration the winners and prize-winners of these landmark starts from Belarus. The event was attended by 20 famous athletes who held a meeting with the management of the NOC and shared memories of their victories.

In the context of the coronavirus pandemic, some events of the NOC Belarus were occurred in social networks, in a virtual format. So, on April 6, the International Day of Sports for Development and Peace, Belarusian athletes joined the International Olympic Committee's #StayStrong, #StayActive, #StayHealthy campaign and, by their own example, showed all sports enthusiasts how to keep fit at home.

In June of this year, a challenge «Olympic Day-2020» dedicated to the International Olympic Day was occurred on the official Instagram account of the NOC of the Republic of Belarus. During a month, subscribers completed tasks that were offered by famous Belarusian athletes, and the best ones received prizes. More than 300 people took part in the action. At the same time, more than 20 famous national athletes recorded a video message in which they congratulated everyone on the International Olympic Day.

The National Olympic Committee of the Republic of Belarus gives considerable attention to information support and interaction with the media. The news of the NOC of the Republic of Belarus is published in the national and regional mass media, as well as in the form of news stories on all state television channels and as news on the radio. Most of the news articles are original or translated articles taken from the official resources of the IOC, EOC and ANOC.

Social networks play an important role in popularizing the Olympic movement. The NOC is represented on all the most popular platforms: Instagram, Facebook, Vkontakte, the number of subscribers exceeds more than 45 thousand in the Team BY community in the Viber messenger.

A number of activities, despite the full implementation of their preparation plan, have been canceled or postponed in 2020 due to the coronavirus pandemic.

Also, a number of other issues on the further activities of the NOC of the Republic of Belarus and its structural divisions were considered at the meeting.

Lukashenko: Belarus should put together an efficient Olympic team

The meeting of the Communications Commission of the NOC Belarus

Development of football discussed in the NOC Belarus
© National Olympic Committee of the Republic of Belarus, 2011 - 2021
Website development - ArtisMedia