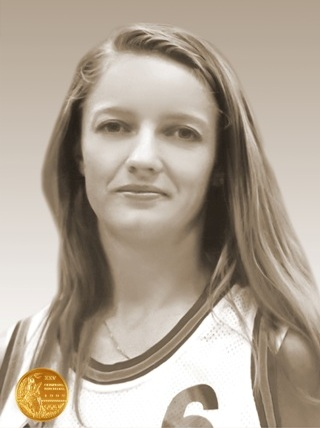 Holder of the medal "For outstanding achievements in sport".

Silver medalist of the World Cup 1986

Two-times bronze medalist of the European Championship in 1995, 1999

Bronze medalist of the Russian championship in 2002-2003

Three-times medalist of the Hungarian championship in 1998–2000

Silver medalist of the USSR championship in 1989

Bronze medalist of the USSR Cup in 1982

Irina Sviridenko was born in a large family in Minsk on 15 October 1964. All family members were avid sports enthusiasts. Irina’s mother was the captain of the small family team. She took the kids for skiing in winter and cycling in summer. Then the initiative passed to the eldest son. One day he hang a basketball hoop on a tree in the garden of a private house. Since then the younger ones - George and Irina - competed for hours in the distance and accuracy of shots. Back then they did it just for fun.

No one expected that two Olympic champions would grow up in the same family.

Irina tried many sports as a kid. At first she asked her parents to enroll her into a gymnastics or figure skating class. She was good at gymnastics, but she joined the class too late. As for figure skating, it did not work, either. There were all kinds of sports equipment at home (bicycles, rackets, skis, balls), so the parents decided not to buy her figure skates.

Irina tried her hand at many other things. She danced in a folklore ensemble, sang in a choir, and in the fourth grade she added swimming to her daily routine.

Irina had a great passion for physical education lessons at school. She learned everything on the fly. After demonstrating basketball dribbling, she received an invitation to a children's sports school. At the same time, she also did incredibly well in short-distance running and high jumps.

She tried to combine basketball and track and field. However coach Tatyana Masich persuaded Irina and her parents to finally decide in favor of basketball and to get enrolled in a sports class at School № 44.

From the age of fifteen, Irina began to play for the team of Minsk-based Horizont led by Semyon Khalipski. Her distinguishing features were her ability to anticipate the situation and quickly move around the court.

She was a great point guard. She was absolutely stunning in this position. She could do everything on the court, which made her rivals stand in awe.

Irina Sviridenko played for Horizont during its heyday. The team was made up mostly of players of the national team of Belarus. For ten years, Belarusian basketball players always competed for the right to become one of the USSR’s top three teams. Irina had good chances to get into the USSR national team.

Yevgeny Gomelsky (famous basketball coach) invited Irina to join the national team in 1984. She was viewed as a valuable player and his right hand.

Irina began performing under the name of Sumnikova in 1987.

In September 1988, the Sviridenko family got two reasons to celebrate. Her brother Georgy became the Olympic handball champion in Seoul, and Irina won a bronze medal at the same Games in the basketball tournament.

But the biggest victory of Irina Sumnikova was still ahead. Her team took part in the Summer Olympic Games 1992 in Barcelona. The USSR team was viewed as the main challenger of the CIS team. But the best basketball players from all over the former Soviet Union managed to push them not even to the second, but to the third place. The leadership skills of the CIS team leader were undeniable. She inspired and encouraged her teammates to act fearlessly on the court.

In 1992 she signed a contract with the club Oberhausen from Germany, and in 1994 she was invited to play for the Russian national team. At the Olympic Games in Atlanta, her team landed fifth, losing one point to the opponents from Australia.

However, the girls did not doubt that they would be able to make up for it in four years. The coach and the experienced point guard understood each other halfword at the Seoul 1988 Summer Olympics, Barcelona 1992 Summer Olympics, and Atlanta 1996 Summer Olympics. And it was easy to imagine how frustrated Yevgeny Gomelsky was because of the injury Irina got at the Sydney 2000 Olympics.

She was badly injured by Cuban player Maria Leon. The injury turned out to be a fracture with a displacement of the cheekbone. At the time, Irina didn't know how serious her injury was, so she went to the court to play again. She ended up breaking an arm.

At first Irina Sumnikova received a cosmetic surgery right away in Australia. The surgery was followed by several months of rehabilitation at home.

The legendary point guard was not defeated. She was simply removed in the most indecent way.

Her last international tournament was the semi-final of the 2001 European Championship; she did not make it to the final.

Since 2005 Irina Sumnikova has been working in the Russian Basketball Federation. Simultaneously she was elected member of the FIBA-Europe Women's Commission (2006–2010), and re-elected for a second term (2010-2014).

After passing a difficult exam in Zagreb in 2008, she became the first female FIBA Commissioner in Russia.