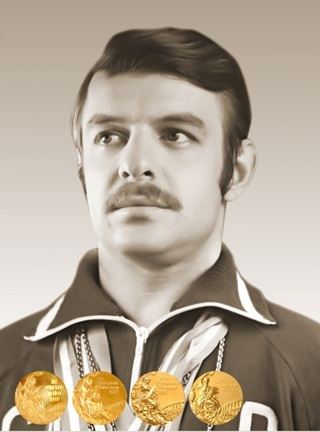 Fifteen-time winner of the European Cup.

Viktor Sidyak was born on November 24, 1943 in Anzhero-Sudzhensk, Kemerovo Region. A few years later the family moved to Donetsk. In the postwar years, young people were very keen on sport. First, Viktor went into boxing. With fencing growing in popularity at that time, Viktor joined the sports group led by Gennady Galiakbarov.

The family welcomed his sporting interests. Although the father, who worked in senior engineering positions for many years, wanted his son to continue family traditions. After leaving school, Viktor wanted to enroll into the Institute of Physical Education, but his father-engineer insisted on the Polytechnic Institute. However, Viktor never graduated from the university. He was constantly busy with trainings and was quickly progressing as an athlete. Already in the mid-1960s he became a member of the national team of the Ukrainian SSR. He was known as a left-handed fencer being inconvenient for rivals, and focused on attacking actions in a duel.

In 1968 at the XIX Summer Olympic Games in Mexico City, he won a gold medal in team competitions.

In 1970 the leaders of the Committee on Physical Culture and Sports under the Council of Ministers of the BSSR - Viktor Liventsev and German Bokun - invited him to move to Minsk. From that moment, Viktor Sidyak’s career really started taking off as he won all the tournaments in which the USSR national team took part.

However his main victory came at the 1972 Summer Olympics as he became the first Soviet fencer to win an individual gold.

There was a chance to win two golds. But the Soviet team which featured great athletes placed second in the team final, which was the greatest upset of the fencing tournament. It’s just that the circumstances were dramatic. The Soviet team defeated Italy in the first round. But Viktor was seriously injured as a fragment of Michele Maffei’s blade wounded Viktor in the eye. Viktor underwent a surgery, with the German doctors advising against competing. The coaches had a long discussion but finally made a decision that Viktor would take part in the final under the third number, i.e. he would start and end the match. The next day he fenced in the team final with his right eye bandaged over.

The final was tense. The eye didn’t hurt but fencing with a bandaged eye was extremely uncomfortable. Viktor lost his orientation, didn't feel the distance and couldn't adapt to protect himself on the right. In the first battle, he lost to the rival, whom he never lost, with a score of 4:5. Then a chain reaction followed as all teammates lost their fights.

In 1973 he won another unique award, made in a single copy. Life-size golden saber designed for the winner of the "Martini" Cup tournament in Brussels.

At the XXI Summer Olympic Games in Montreal in 1976 Viktor Sidyak won a bronze medal in the individual competitions, losing only to Soviet sabre fencers. A few days later he got a gold medal in the team competitions.

In the period from 1994 to 2002 he worked in the Italian sport club Fides (Livorno) where he coached Aldo Montano, the future Olympic champion.

Upon returning to Belarus, he worked as the General Secretary of the Belarusian Professional Boxing Association.

In 2007 he moved to Russia where he headed the International Center of Olympic Reserve at the Odintsovo Humanitarian University.