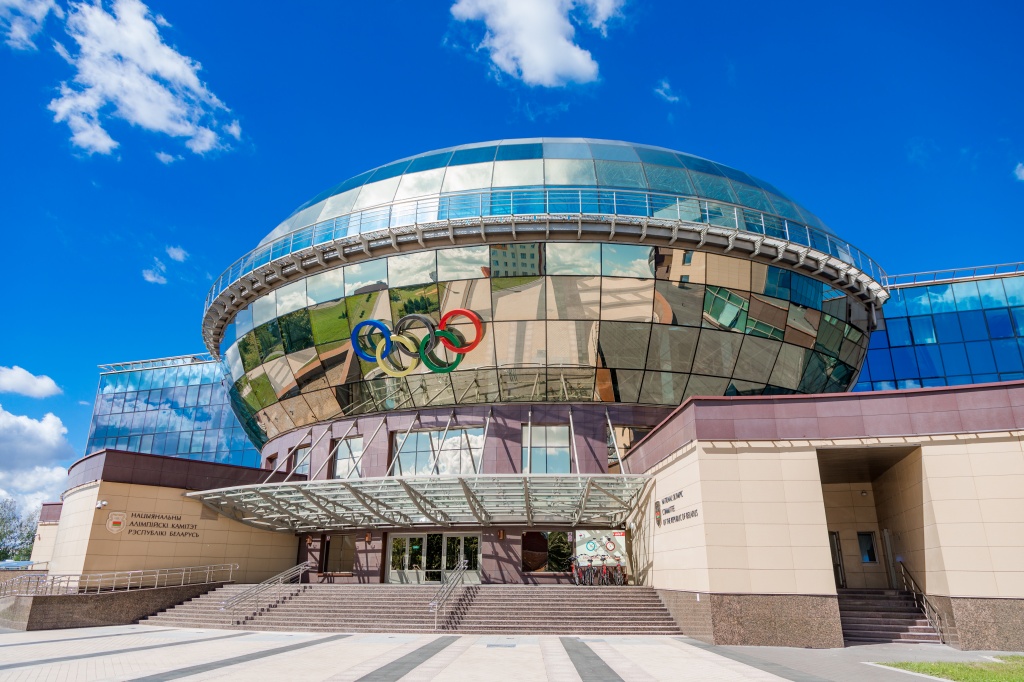 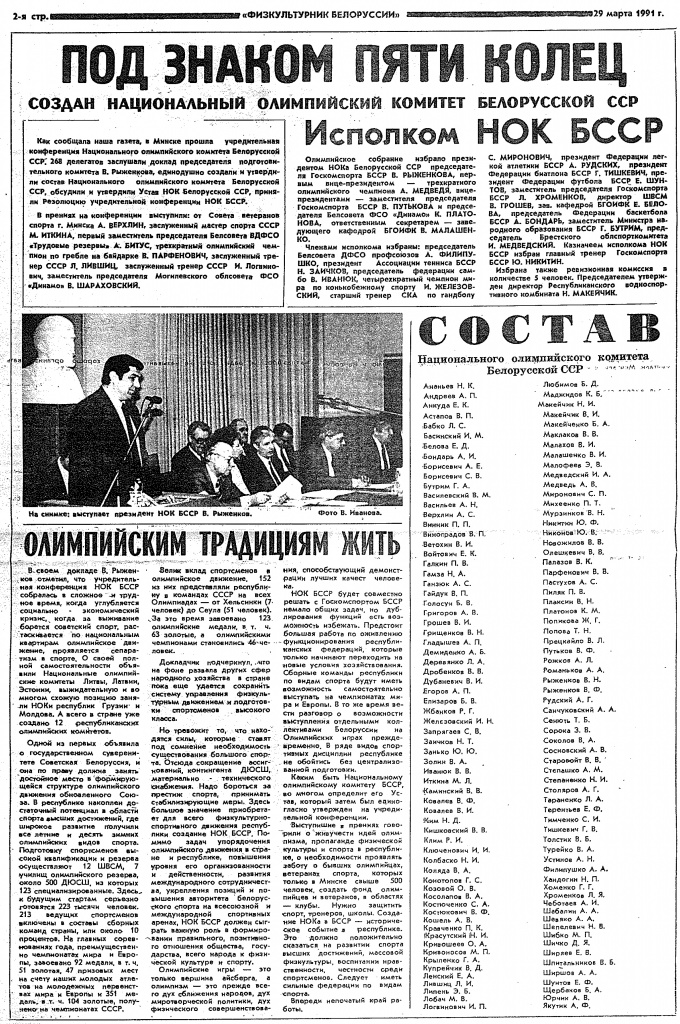 According to archive documents, 268 delegates heard out a report of the steering committee. On 29 March 1991 the Fizkulturnik Belorusii sports publication wrote: “Taking part in the debate at the conference were A. Verkhlin (the Council of Sports Veterans of Minsk), M. Itkina (HonoredMaster of Sports of the USSR), A. Bitus (First Deputy Chairman of the Trudovyye Rezervy association), V. Parfenovich (three-time Olympic champion in canoe sprint), L. Livshits (Honored Coach of the USSR), I.Logvinovich (Honored Coach of the USSR), V. Sharakhovsky (Deputy Chairman of the Mogilev Regional Council of the Dynamo sports association).

Chairman of the Council on Physical Culture and Sports of the BSSR Vladimir Ryzhenkov was elected first president of the NOC of Belarus. 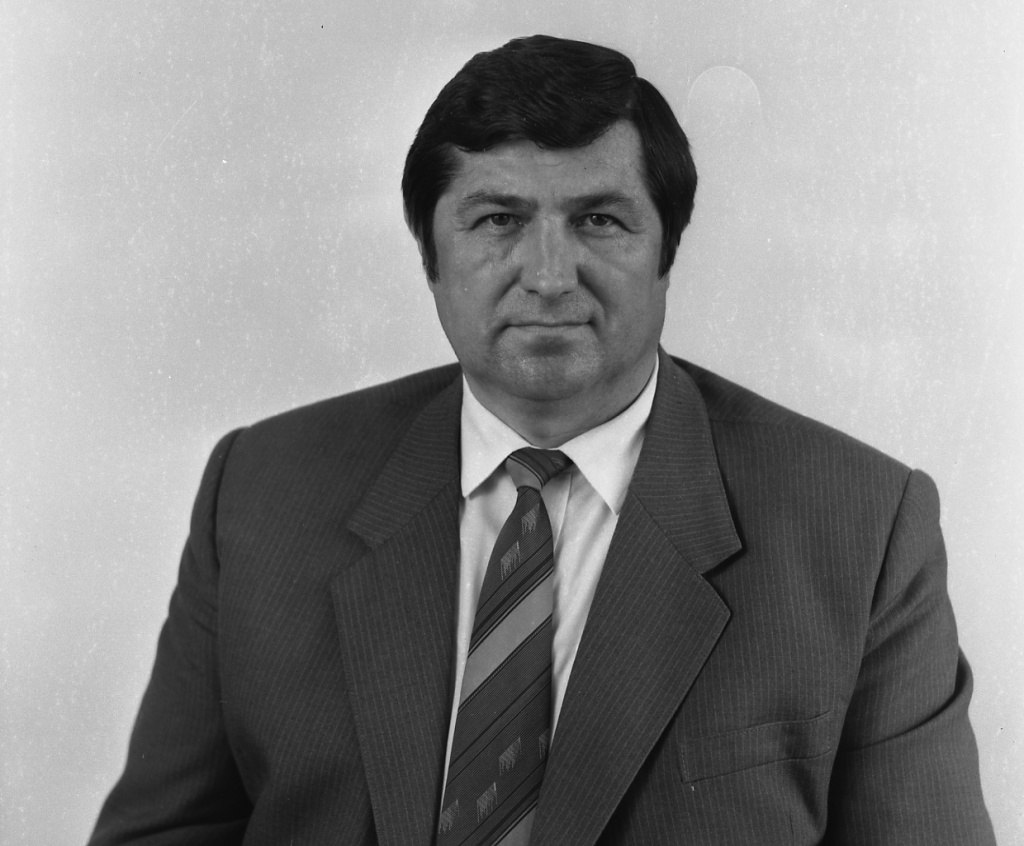 Vice President of the NOC of Belarus Viktor Putkov recalled: the paperwork needed to register еру new sports organization had to be done from scratch. The Council on Physical Culture and Sports of the BSSR recruited any help it could find to translate the Charter from English. Unfamiliar terms, legal subtleties – that was only a small part of the huge work towards the establishment of the NOC of Belarus.

International activity has been an important area of work of the NOC since its inception.

In recent years, Belarus has hosted an array of important sports events: the 2014 IIHF Ice Hockey World Championships, the 45th General Assembly of the European Olympic Committees, the junior world championships and the World Cup stages in various sports.

Many high-ranking sports officials from abroad acknowledged dramatic improvements that took place in Belarus’ sports, emphasizing that the country was capable of holding top-class competitions. 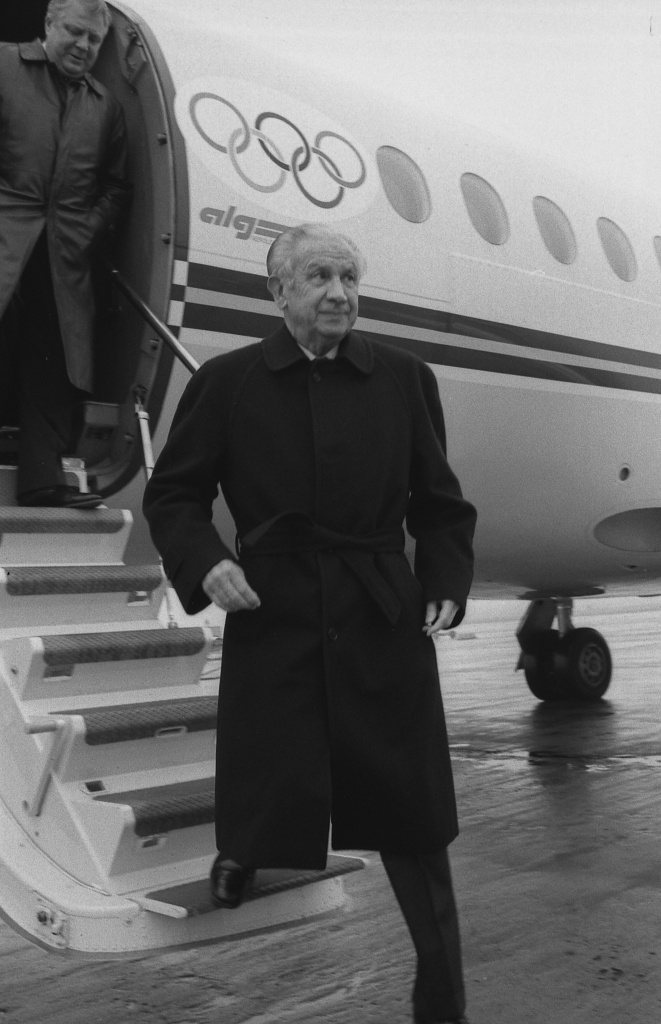 Less than a month later, on 6 April a charter jet landed at Minsk International Airport with President of the International Olympic Committee (IOC) Juan Antonio Samaranch on board. The program of his visit included meetings with the chairman of the Supreme Council of Belarus and the prime minister, members of the NOC Executive Board, and a press conference. 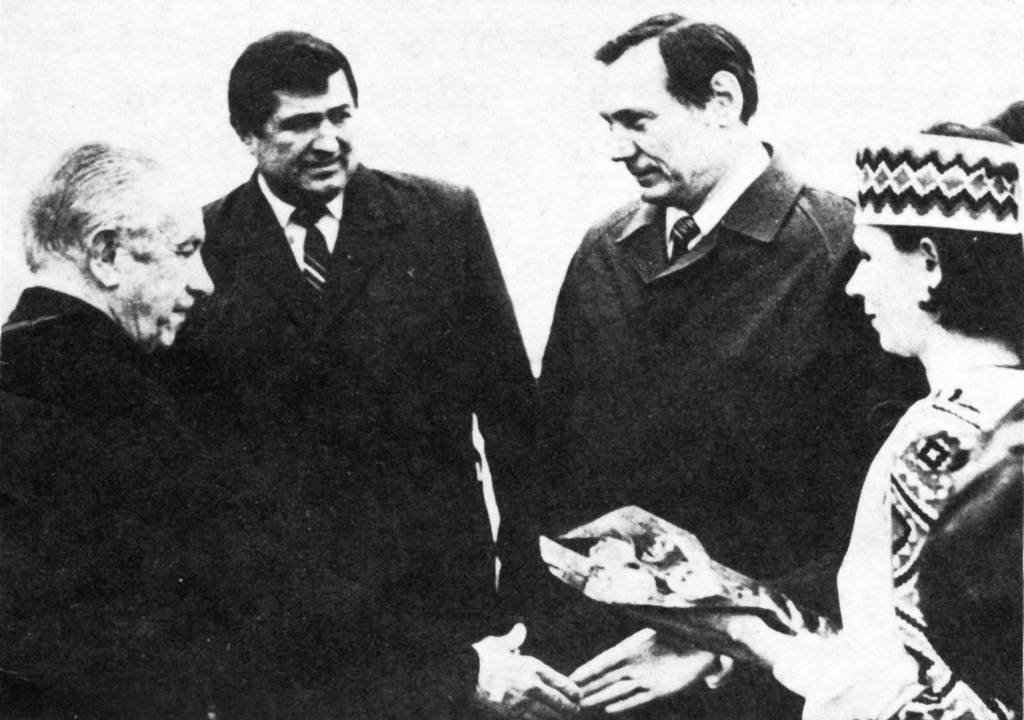 Famous wrestler Aleksandr Medved recalled that the IOC president liked a birch bark souvenir. “We spent a lot of time thinking what kind of souvenir would be the best cultural token from Belarus? As a result, we chose a birch bark souvenir. Samaranch really liked it. The IOC president was known as a humble person; he was very diplomatic and tried to find common ground with everyone. Under his leadership, the Olympic movement undoubtedly gained a new lease on life,” Aleksandr Medved recalled.

The 101st session of the IOC, which took place in Monaco on 21-25 September 1993, was another important milestone for Belarusian sports.

At this session, in addition to the re-election of Juan Antonio Samaranch, the voting on the host country for the Summer Olympiad (Sydney) and the recognition of beach volleyball as an Olympic sport, the NOC of Belarus was recognized a full member of the international Olympic family. The Republic of Belarus got the right to send its national team to the Olympic Games!

Belarusian athletes debuted as an independent team at the 1994 Olympic Games. This historic event took place at the Winter Games in Lillehammer, Norway. Belarusian athletes won two silver medals: in speed skating (Igor Zhelezovsky) and biathlon (Svetlana Paramygina). Ekaterina Karsten (Khodotovich) won the first Olympic gold in the history of independent Belarus. It happened in Atlanta, USA on 28 July 1996 In the run-up to the Games, the Belarusian was not favored to win. 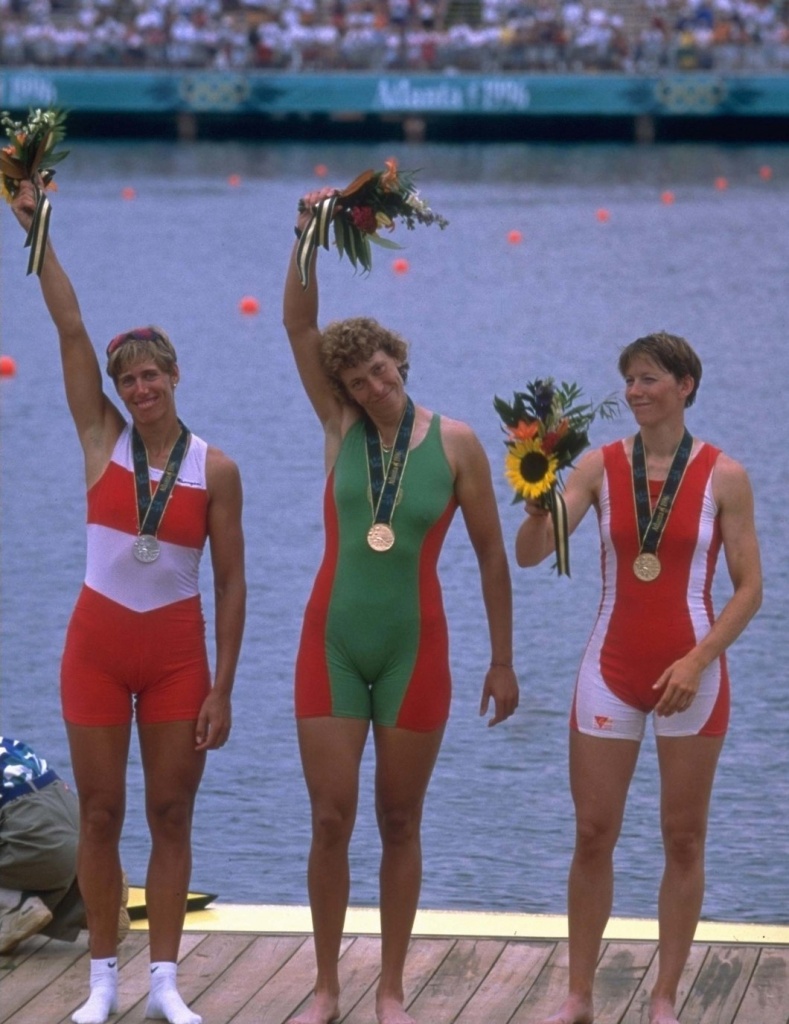 Ahead of the trip to Atlanta, the Sport and Tourism Ministry asked the athlete:

– What are your expectations from the Olympics?

– I just want to get to the final, she said modestly.

On the eve of the final, photojournalists relentlessly pursued Canadian Silken Laumann and she was beaming with confidence. Anatoly Kvyatkovsky realized the psychological moment, took out his camera and began to shoot his student. He, a coach of twenty years of experience, understood the mental state she was in. He smiled and joked, and Katya relaxed, even tried to persuade him to be more serious, in tune with the moment.

In the final the Belarusian was smooth, confident, strict on the schedule, while the Canadian was clearly nervous, twice made attempts to accelerate provoking the rivals. 500 meters before the finish, the Belarusian and Canadian were neck and neck. Closer to the finish Katya made a dash. 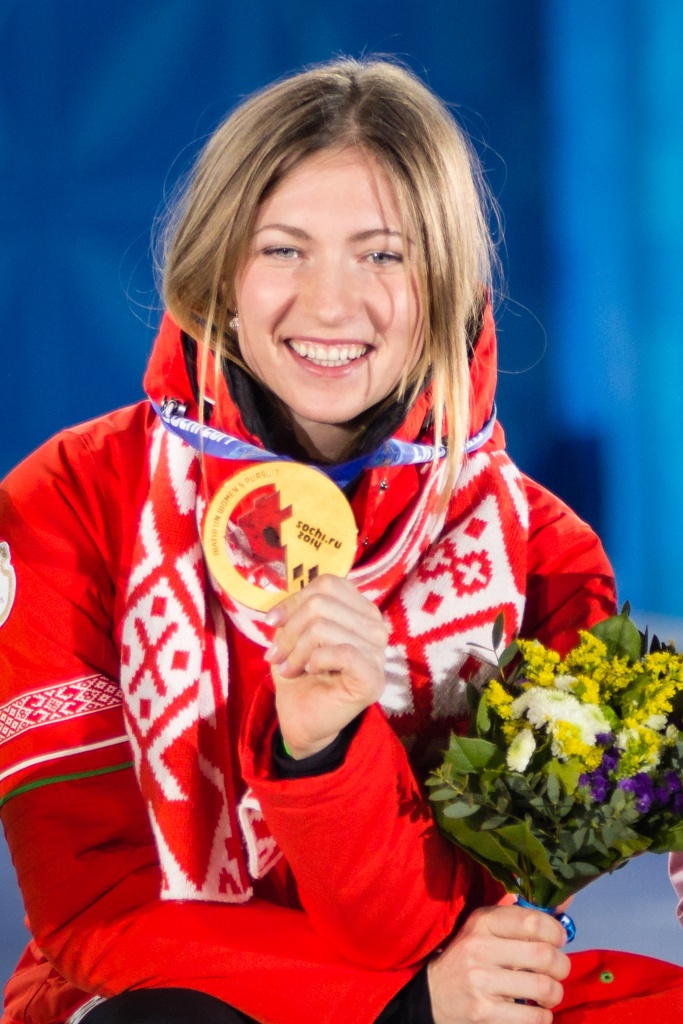 Since the founding of the National Olympic Committee, the country's athletes have competed at 13 Olympic Games - 7 Winter Games and 6 Summer Games. A total of 128 Belarusian athletes became champions and medalists of the Games. They won 96 Olympic medals: 20 gold, 32 silver and 44 bronze. Belarus is rightly one of the world's leading sports powers.

An important milestone in the development of Belarusian sports was the election of Aleksandr Lukashenko as president of the NOC. It happened on 15 May 1997

"I was driven by the desire to preserve all the best things that the country had accumulated in sport during the years of its participation in the international Olympic movement," the president said later.

With the election of Aleksandr Lukashenko to this post, sports life in the country received a new powerful impetus. The infrastructure has been modernized. Central stadiums and Olympic complexes have been reconstructed. The president's scholarships have been instituted.

Belarus has promoted such Olympic sports as ice hockey, biathlon, football, athletics, box, rowing, tennis, weightlifting, and other sports. The country has created conditions for the development of mass sport, children’s and youth sport, and for professional growth of Belarusian athletes.

Aleksandr Lukashenko was presented with two special prizes of the International Olympic Committee for his services to sport and the Olympic movement as the president of the Belarusian NOC.

In 2013, the National Olympic Committee of Belarus moved into a new headquarters. This building has a very interesting architectural concept. Since 2014, this building has hosted ceremonies to see off Belarusian athletes to the Olympic Games. We believe that many athletes whose victories at international competitions are celebrated in Raduzhnaya Street [the address of the headquarters], feel almost at home here. Every regional center is home to sports centers and indoor ice rinks. There are new sports and recuperation facilities in Berezino, Brest, Borisov, Volozhin, Kostyukovichi, Stolbtsy, Stolin, Cherven, Ushachi, Raubichi, and Krasnopolye. A new sports complex for team sports featuring a ski track opened in Orsha, new stadiums were built in Baranovichi, Lida, Borisov, Ivatsevichi, and an ice arena was commissioned in Shklov. 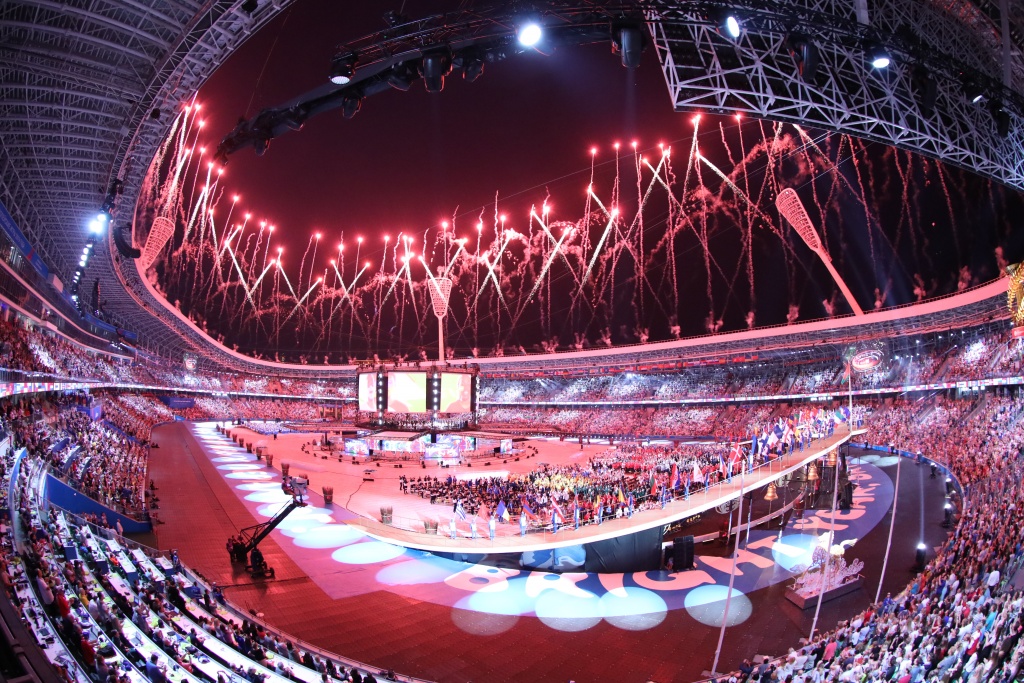 The National Olympic Committee of Belarus is at the start of its journey and is a relatively young organization in comparison with the national Olympic committees of neighboring countries. We believe that the Belarusian NOC will continue following the main principles of the international Olympic movement, facilitate the development of physical culture and professional sport, and improve the sports infrastructure in Belarus.