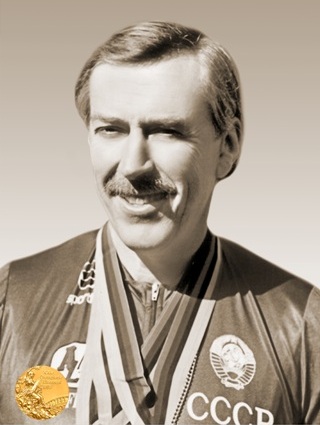 Vladimir Kaminsky was born on 18 April 1950 in the village of Tsna, Minsk District, Minsk Region. His two elder brothers were cyclists, so Vladimir had an opportunity to ride a real racing bike. However, he did not get into cycling right away.

After school, the young man entered Minsk Electrical Engineering College. In his first year, Vladimir Kaminsky enrolled in a skiing club and even qualified for the rank of Second-Class Sportsman. However, later he followed in his elder brothers’ footsteps and enrolled in a cycling club of the Spartak sports society in Minsk in 1967. At that time, the future Olympic champion was 17 years old, the age when many athletes finish their career.

After his success at various children's and junior competitions, Vladimir Kaminsky was noticed by Leonid Korbut, a famous coach and respected cycling expert. In 1970-1971, Kaminsky started participating in national and Soviet championships in a team with Nikolai Dmitruk, Vikenty Basko and Mikhail Zorin. In 1973, the talented young Belarusian athlete was noticed by Viktor Kapitonov, the champion of the 1960 Olympic Games in Rome and the head coach of the USSR national team. He invited Vladimir Kaminsky to the training camp of the national team.

After three years of training, Kaminsky secured a place on the USSR team at the upcoming 1976 Olympic Games in Montreal. Estonian Aavo Pikkuus, Russian Valery Chaplygin, Ukrainian Anatoly Chukanov, and Belarusian Vladimir Kaminsky were to represent Team USSR in 100km team time trial. Shortly before going to Montreal, Vladimir Kaminsky was injured, but the doctors managed to get him back on his feet. In Montreal, Team USSR won a gold medal, outracing the Polish national team by 20 seconds!

Vladimir Kaminsky did not participate in the 1980 Olympic Games in Moscow, although his team won the USSR championships. Later, Vladimir said that he gave younger athletes the opportunity to win Olympic gold medals.

After retiring from sport, he completed the military service and later defended a PhD in cycling on the topic "Methods of training of cyclists in a team race."

At present, Vladimir Kaminsky teaches at the cycling, skating and equestrian sports department of the Belarusian State University of Physical Education.