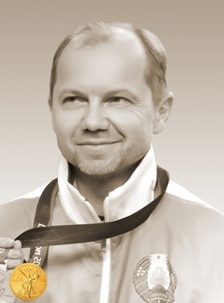 Master of Sports of the USSR International Class

Honored Master of Sports of the Republic of Belarus

Order of the Fatherland (3rd Class)

Bronze medal in the 50m rifle prone event at the I European Games in Baku-2015.

Sergei Martynov was born on 18 May 1968 in Vereya, Moscow Region. Almost immediately after his birth, the family moved to Belarus, Brest. Sergei Martynov studied at Brest School No.12. The future Olympic champion took up shooting classes in the sixth grade.

At the age of 20 the athlete took part in the 1988 Olympic Games in Seoul. Before that, during the two pre-Olympic years, Sergei Martynov won five gold medals at junior championships, as well as gold and bronze medals at the USSR Spartakiad, so the coaches of the Soviet national team put high hopes on him. However, at his first Olympic Games the Belarusian athlete took only 14th place.

Sergei Martynov was not on the national team at the 1992 Summer Olympic Games in Barcelona. At the 1996 Summer Olympic Games, the first Olympics for the independent Republic of Belarus, Martynov stopped just a few steps away from the podium. The following year and for the next 15 years (until 2012), the athlete repeated the absolute world record (600 points) in the 50m rifle prone event.

The Summer Games in Beijing-2008 became the fifth for Sergei Martynov. However, even in his favorite event (prone event), he took only eighth place.

At the Summer Olympics in London-2012, 44-year-old Sergei Martynov scored 600 points in the qualifying round, perfectly shooting all 6 episodes and repeating his own world record. The Belarusian athlete reached the final, where he scored 105.5 points. All in all, he scored a total of 705.5 points, which was a new world record that made him an Olympic champion.

Gold medal of Sergei Martynov’s in rifle prone shooting was the only one for Team Belarus in individual disciplines at the Games in London.

At the Games in Rio-2016, Sergei Martynov was supposed to carry a flag of the national team at the opening ceremony, but was replaced by cyclist Vasil Kiryienka. According to the new rules, only athletes participating in the Games could carry the flag, and Martynov attended the 2016 Olympics as a coach.