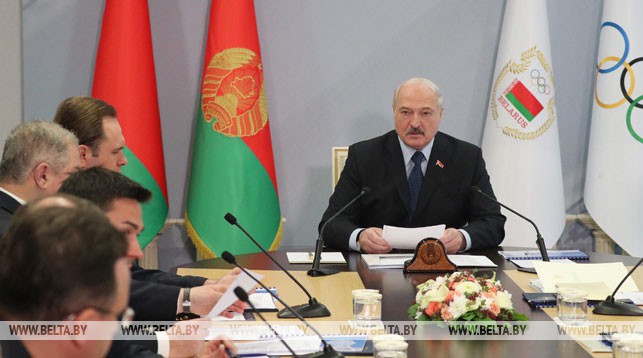 The forthcoming European Games will become a landmark social and political event in the history of sovereign Belarus, President Aleksandr Lukashenko said at the session of the Executive Committee of the National Olympic Committee (NOC) on 15 April.

In particular, the session of the NOC's Executive Committee is focused on the preparedness of the country and athletes for this large-scale sports event. “We will be in the center of attention of the global community during these days. The goal is not only to host the games at the highest level. We must show once again that our country has created comfortable and, what is also important, safe conditions for the life and self-fulfillment of a human being,” the head of state emphasized.

According to Aleksandr Lukashenko, an organizing committee led by the prime minister was established to gear up for the European Games, necessary financing is provided. “Sports facilities, telecom networks, road infrastructure, passenger transport, a students' village should meet the highest standards. As I am informed, all issues are addressed promptly. Infrastructure modernization proceeds on schedule. However, I would like to discuss this topic in detail today,” he said.

The head of state emphasized that he is waiting for concrete proposals regarding all unfinished construction projects, the purchase of gear and equipment, the use of additional forces and funds. “There was a task to monitor expenses, ensure the rational use of all purchased equipment, a car park, facilities after the games. How are these requirements fulfilled?” the Belarusian leader wondered.